Someone recently told me that they thought I was creative. As much as I’d like this to be true, it really isn’t.

Over the last few months, I have been working with a lot of people that I know (initially anyway) through Twitter. They are helping me deliver some key elements of the leadership development programme where I work.  I have asked these people to come and work with me for one simple reason.  They are really good at what they do.  We are delivering sessions on mindfulness, leading change, resilience and positive psychology, to name just a few.  This year, some of the folks from my network have also helped me to deliver targeted social media training and start us on a journey towards digital skills.

Twitter is awesome for this stuff. For helping you find and connect with great people. Smart people, who are simply sharing their stuff, putting it out there, expecting nothing immediate in return.  In the past, stuff that we would probably have had to pay for, out there in the world for free.  Practical stuff, and ideas too. It’s this thing called the sharing economy.

Recently, someone I know through Twitter sent me a tweet, asking me if I’d share our social media policy with her. So I did.  But there is probably someone out there that would have been willing to charge for that service.

I draw on my network every day. In the past, I’ve sent a generic tweet or posted in a G+ group I’m a member of, asking for recommendations for a particular type of supplier. I’m about to start some work with someone who responded to just such a post. Then there are companies that I have first come across in the social world, and then begun a dialogue with which has turned into a partnership.  Then there are the vacancies that have been filled through a kindly shared link. Then there was the wellbeing idea that I stole from Inji Duducu. But don’t tell anyone about that.

When I have a particular need in the people stuff space, I usually know someone somewhere in my network. And if I don’t, someone in my network will and then they will tell me about them.  Our networks are like a spiders web of ever increasing connections, reaching further than they have ever done before.  BT (Before Twitter) my network would probably have been some folks I’d met at networking events within a 10 mile radius of my home or office.  Now, we are closer than ever to Kevin Bacon, or at the very least, another professional in your field.

My network is also my PLN (Personal Learning Network). With the exception of the books that I read (and actually, the really good one that I am reading right now was recommended by a tweep), the social world is where I learn pretty much anything new.  Whether article, blog, tweet, slideshare or Ted Talk, someone is bouncing something useful in my feed every single day. I don’t even have to go and look for it, it just naturally comes my way.

At the recent #cipd15 conference, I sadly had to miss the final keynote. But thanks to the tweets and blogs from my network, I can see that Herminia Ibarra talked about the power of networks.  She said that without a network that is diverse, you die a little every day in terms of capacity. Her recommendations for forming  networks are breadth, connectivity, and dynamism.  Don’t just connect with people like you, but connect widely.

In 2015, in our connected, social, sharing world, increasingly, you are your network. 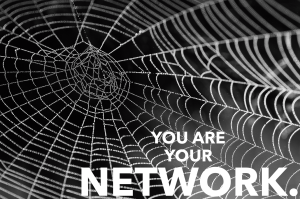 2 thoughts on “It wasn’t me, it was my network”