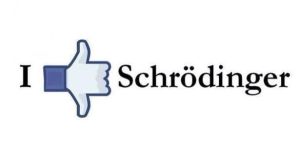 I met a man recently, whom I would describe, in true Schrodinger’s cat style, as both engaged and disengaged.

Engaged with his job, his colleagues, his day to day. His job has meaning for him. He has friends there. The hours suit him fine and the pay isn’t too bad. The working environment makes the grade. He knows what is expected of him, he has all of the right tools and equipment, the opportunity to do his best every day. Willing to do the discretionary effort thing, when it’s needed. Proud of a job well done. He even has a best friend at work.

Many of the Gallup measures ticked off, right there.

Although he wouldn’t fill in any kind of survey, if you asked him.

The last time he was sent one, he said that They could stick it right up Their arse.

When he told me this story, he mimed it too. Screwed up an imaginary piece of paper into a ball, tossed it into an imaginary waste paper basket. And followed the imaginary trajectory with a not at all imaginary two fingered salute.

They don’t understand what it’s like on the shop floor.
They don’t know what it’s like outside of the nine till five.
They sit in their ivory bloody towers in the head office.
They send out surveys and they take no bloody notice of what you say anyway and they put a number on it so they can trace it back to me if they want to so I’m saying nothing.
They gave us these stupid values. What a joke. As if anyone has got any time for all that when there is a job to be done and anyway, They don’t follow them. I know They don’t.
They change everything every five minutes.
They makes us go on all these training courses just to tick a bloody box.

So where exactly does this fit into the neat little employee engagement box?

And then it dawned on me. That the They that he talks about, is me.
Not me personally maybe, but someone just like me. Sitting in an office, crafting policies. Sending out surveys. Launching initiatives. Making people plans.

And all the time, he is seen, but unseen.

13 thoughts on “Engaged but Disengaged”