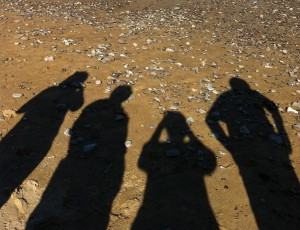 ‘A dark area produced by a body coming between rays of light and a surface’.

You have probably heard of the shadow of the leader. Put simply, it means that the actions of leaders within organisations have a significant influence upon its culture. Leaders cast shadows. Their behaviour, attitudes and values flow down through an organisation whether or not they intend them to, or are even aware of them.

When we stand in the sun we cannot help but cast a shadow, and a leader cannot help bust cast one too. We should never underestimate the power of the leadership shadow.

In Jungian theory shadow can mean two things. It can mean the unconscious – everything of which a person is not fully aware, or it can mean an unconscious aspect of the personality which the individual does not recognise in themselves. We don’t always know what shadow we cast. But we can find out.

So what contributes to shadow?

Everything. Your tone of voice, your attitude, your facial expressions, your presence or absence. What you say and how you say it. Aware, or unaware.
Every, single, thing that you do.

The concept of shadow can have a negative connotation. We think of darkness, gloom, even ghosts. But what can be finer on a summer’s day than sitting in the cool shade? Your shadow as a leader can be powerful, positive influence. Turn up to work with you best self, your positive self, your collaborative self, and you will influence the people around you to behave and feel the same way.

So whatever crap you are going through, whatever pressures you are under, whatever hassle you are getting from your boss, make a choice. Don’t let it flow into your shadow. If you are a leader, you have a responsibility to make being in your shadow a good experience.

The idea of leadership shadow is obvious, if you take a moment to think about it. What isn’t so obvious to our own selves is the nature of the particular shadow that we cast. Jung says our shadow is unconscious. But we can bring our leadership shadow into consciousness. We can become self-aware; understand the shadow that we cast, its depth, its reach.

You can choose the type of shadow you cast.

So consider, inquire, reflect. What do people say about you when you are not in the room? If they hear your name, what is their first thought? How do you behave, every day, ever minute? Our natural tendency is to ignore, reject and deny, those things that we find hard to hear, those things we don’t want to accept about ourselves. Honesty is key here. Look in the mirror.

And if you don’t know how people percieve you, what it feels like to be caught in your shadow, then maybe you should ask.

3 thoughts on “Caught in the Shadow”